Ricky Gervais recently made a Facebook and Twitter post harassing 13-year-old huntress, Aryanna Gourdin and her right to hunt. Gervais is an English actor, comedian, animal rights activist, and singer. He has also been named “PETA’s 2013 Person of the Year.” 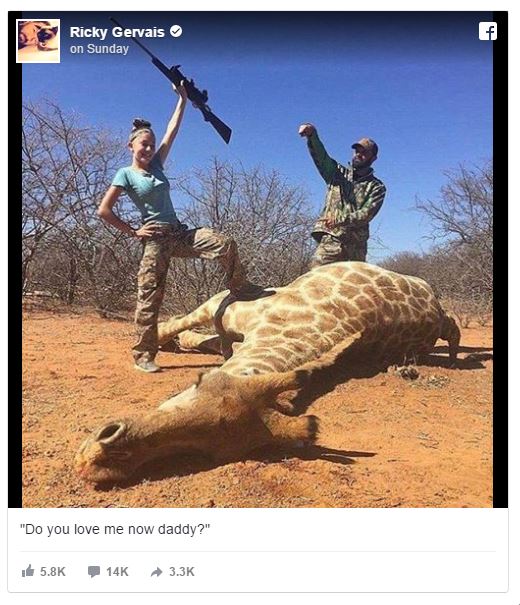 “Do you love me now daddy?” pic.twitter.com/ckuS6ZUkSQ

Last year in August, Aryanna and her father, Eli, went on a hunting trip to Africa. During her hunting trip in Africa, she legally harvested a giraffe and donated the meat to the African natives. Aryanna simply decided to post a picture her harvest on Facebook. Unfortunately, because of anti-hunters on the internet, she received many hate messages and even death threats! She received over 75,000 negative comments on her Facebook post. She has been called “sick” and “animal hater.” Aryanna has not recanted her hunting lifestyle. She simply has replied kindly and softly to this situation saying, “I will never back down from hunting, because I am a hunter!”. Many outdoorsmen and supporters of Aryanna have stated, “Let the haters hate. Hunt away Aryanna!” So, after all of that, Aryanna receives more hate from a renowned actor.

The facebook post that Gervais made has now over 15k hate comments. The man in the image is not Aryanna’s father. It was the guide on their trip, Mark Martineau. So Gervais must have been oblivious to the story behind the photo. Martineau reacted to Gervais by posting on his page with over 150k followers, “I don’t believe the city dwelling *moronic* celebrity is a fan of ours :(.”

Read Blake Alma’s about our right to hunt: