When I was 14-years-old, I would set up several modified rat traps for the purpose of trapping squirrels for both meat and fur. I accidentally ended up trapping a chipmunk instead. I feeling sorry for the unwanted kill, decided to use its death for good use. I ended up skinning it and salting the skin. After the skin was dried, I decided I would use its hide as a bookmark for my recently published book, The Outdoorsmen Bible. 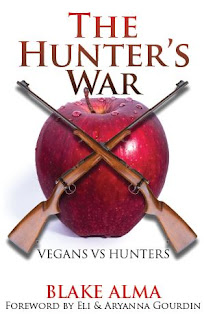 I ended up writing a how-to-do article for instructables.com about the chipmunk bookmark. I showed the reader how to trap the chipmunk, skin it, and salt it. It was simple and fun. It was published and I received about 100 hate messages during the first day of its publication. This was my very first time ever experiencing anti-hunters. It discouraged me at my young age. My most hurtful hate comment was the following: My only wish is to fill your skull with molten aluminum, and hammer your fingers alive, and drill your teeth with a strong driller…I’m serious, cause you’re a bad and useless creature (unfortunately). Even though “creature” is much for you, then let’s say you are “some juxtaposed atoms taking up space“. Nevertheless, this did not stop me from fighting the hunter’s war!

I will be releasing a book titled “The Hunter’s War: Vegans Vs. Hunters” on January 2nd.

In this modern world, the war between vegans and hunters is always growing. Hopefully, this war will come to rest! The vegan finds fault in the hunter, while the hunter finds fault in the vegan. Who is right and who is wrong? Is killing animals wrong? Is hating hunters wrong? Is the vegan right about their belief of veganism? Who will win this hunter’s war? For this book is for hunters by hunters…