Thursday, 9 April 2020
You are here: Home 10 Every Day Activities That Flag You As A Terrorist 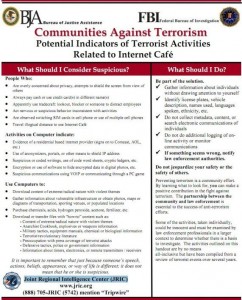 Early in 2012, the FBI and Department of Justice distributed flyers they called “communities against terrorism” flyers to local businesses advising them how to spot “suspicious activity” and encouraging them to report such behavior as potential terrorist activity.

These are just plain ridiculous…

Some of the ordinary activities that are considered by the FBI to be suspicious include:

1. Buying coffee with cash on a regular basis. (Because using cash is un-american…)

2. Paying cash to get a tattoo or rent a car.

4. Being someplace “you don’t belong.” (Or as some may call it… profiling?)

5. Having a missing hand or fingers.

6. Traveling an “illogical distance” to use an Internet cafe. (I own a coffee pot, so I think driving any distance to get an overpriced cup of java is illogical.. but I still do it)

8. Wearing a backpack when the weather is warm. (Students beware…)

9. Making suspicious comments regarding radical theology or anti-U.S. sentiments that appear to be out-of-place and provocative.

10. Conducting financial transactions in bursts of activities within a short period of time, especially in previously dormant accounts. (Does this make my wife a terrorist during one of her shopping spree’s?)

But it doesn’t stop there…

How many of these apply to you?

This article was originally published on Survival Life